Are you up for the mission?

Tell me when it's available 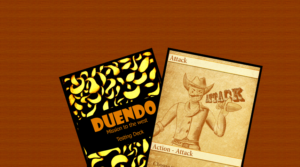 Pick your opponent and unleash your cards on them! Keep your poker face on and your detective eyes out. 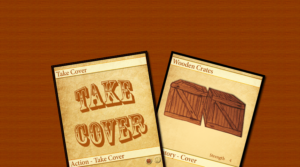 Get Out Your Way

Get out of any situation your way.  Take cover, attack back or put your bluffing skills to the test. 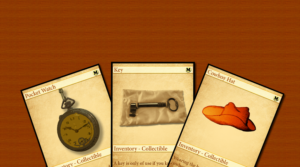 Who ever finds Duendo the voodoo doll, takes control of all of the Wild West!  Do anything in your power to get your hands on the right cards!

More than one player in the same turn!

Yep.  Some circumstances in this card game allow up to 4 players to play within the same turn.  So it may be your turn, but be ready for those who can interfere!

One deck of Duendo cards allows from 2 to 6 players to play.  But who says to stop there!?  Just mix in another deck, and play even up to 12 players!  Oh what fun!

During game play, there might be a situation where you end up with no cards due to being fined a penalty and things spiraled down in the next few rounds.

But no worries!  You'll just replenish on your next turn.

The legend of Duendo tells a story about an ancient Voodoo Doll with special powers.
Anyone getting their hands on this artifact can take control of anyone in the Wild West. To activate its power one needs another two artifacts. Do whatever it takes to find the Voodoo Doll and two other artifacts to win the game!

Attack, steal, defend and bluff your way to victory.

My wife and I enjoy the occasional table-top game, be it board games, dice or card games.  When we have friends over, we try offer choices of what to play, and we can say that Card Games are more popular than Board Games when it is Summer and we're doing BBQ's.  However I'm sure everyone agrees, they are also great for those rainy Winter days.

We have embarked on this project to create a new game combining different elements that make it exciting for different kinds of players.  A game where on a player's turn one can take an action on any other player, not necessarily on who's sitting next to them.  A game where anyone can intervene and stop an action, even though it is not their turn.  And finally a game, where players can use their social skills and bluff their way out of a situation.

We are currently at version 0.9 of the rules, and the game has come along way and evolved a lot with the feedback of many of our followers.  We want to share our progress with you, and would be happy to receive any feedback!  So if you're interested, follow our blog 🙂