This idea for a card game came up at around August 2017.  Initially I started jotting down stranded ideas that felt cool to be in a card game, and ended up with a bunch of disjoint rules and game elements.  All the points I was writing down revolved around adding some element of skill to the game, spontaneous actions and the visible gradual rise in power using a form of coins or chips.

Coins, chips and tokens have always been a fun way to show off how well ahead you are during a game.  This kind of feeling, was something I wanted to have in my game.  While in Monopoly this feeling existed, because it was paper, it lacked something I particularly love doing.  Lifting up chips or tokens, and letting them fall one by one.  Like one does in Poker or possibly the card game “No Thanks“.

The element of skill, among other things, I wanted it to be in bluffing.  People trying to trick each other, keeping a straight face and the anticipation it puts on the table, would definitely add fun to a game of 2 or larger numbers alike.

When I started making sense of my disjoint rules, and creating some flow from one to the next, I got a bit ahead of myself and ended up sketching some reeeeallly rough sketches on A4 papers and cutting them into small rectangles.  This allowed me to reason and picture things better. 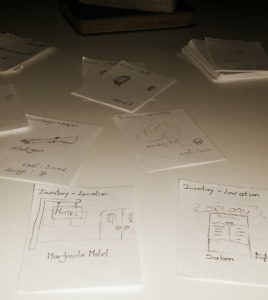 The first basic rules were laid out and included the actions ‘Attack’, ‘Take Cover’ and ‘Thief’.  Since like most of my creative musings, this was being done at night, on the third or fourth day of its development I was playing a somewhat full game impersonating two rival players.  They were the simplest of rules, but something was happening!

After a few more days and some input from my wife, we were playing the game with paper cut outs and writing down notes and alterations on a notepad next to us.  With every round we either added something, removed something or decided to put something back in.  We were getting input from our siblings and their husbands, and our enthusiasm was fed even more.  We were trying different number of cards in hand, and different amount of coins.  Oh right! By the way, for coins we borrowed tokens from other games like the board game Risk or the card game No Thanks haha.

In the upcoming blog posts I will write more detail about some of the rules, and why some cards were introduced.  The rules are not yet cast in stone, still work in progress.  So changes are inevitable 🙂

4 thoughts on “Conception of Duendo”